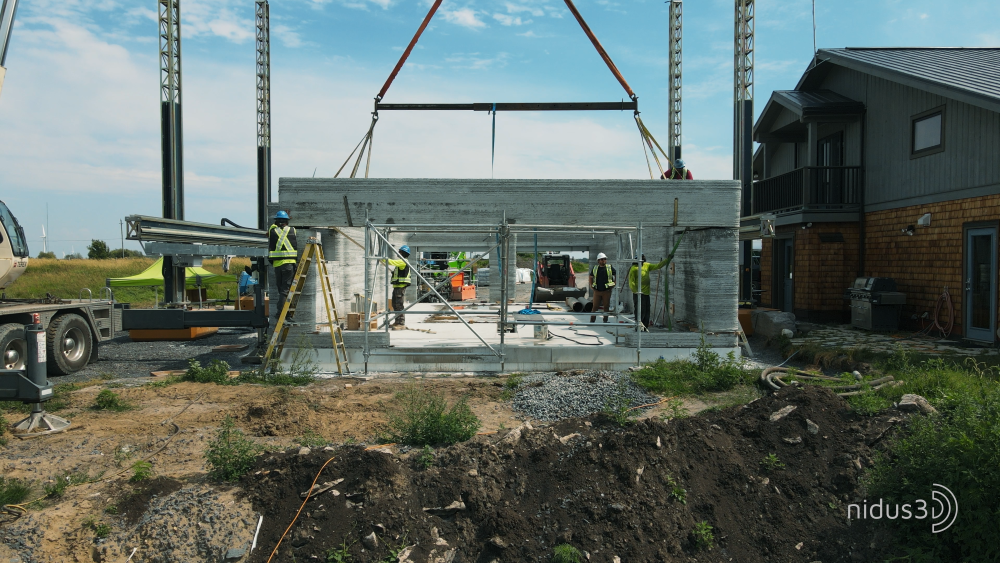 Nidus3D used the BOD2 printer from COBOD, which can print with real concrete with a particle size up 10mm and 99 per cent based on locally found raw materials.

The two-storey house is the second structure nidus3D built, the first being earlier this summer. The building will have a studio on the ground floor and a residence above, and the area of the building will be 2,300 square feet of mixed-use space. One of the new innovative methods nidus3D developed in the project was a 3D printed horizontal beam printed on site and lifted into place by a crane.

With the COBOD International 3D construction printing technology, nidus3D has set out to address the current housing gap in Canada. COBOD and nidus3D both believe this new way of building will be a game changer for the housing crisis.

“We have critical shortfall of skilled laborers, and a massive and growing demand for housing all across Canada,” said Ian Arthur, one of the nidus3D founders. “So, if we do not begin to look at new ways of building, we’re never going to catch up. It is part of our core values, to seek solutions to address the housing crisis and to help build affordable housing with the help of 3D printing.”

One of the many advantages of 3D concrete printed houses is that they can be built quickly. The complete building took only 80 hours to print, down from the 200 hours of the first building and nidus3D is convinced that future buildings will be made even faster.

“Our technology and 3D construction printers enables faster execution of construction projects, as well as more efficient construction at lower cost due to the lower labor requirements and usage of low-cost concrete. COBOD’s 3D construction printers have been used all over the world, and while this two-story building in real concrete is a first and a great success for us in North America,” said Philip Lund-Nielsen, co-founder & head of Americas at COBOD International.