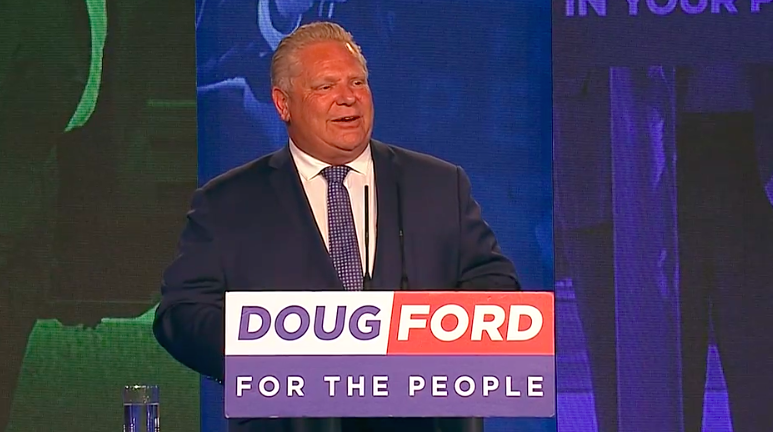 It may not have been the significant majority once predicted for the Ontario Progressive Conservative Party, but it was a majority nonetheless. And it only took a few minutes past the close of the polls for the result to be announced.

When the dust settled, the 15-year Liberal Party reign came to a devastating and abrupt end, much as the outgoing Premier had predicted just a few days earlier (Wynne announced during her concession speech that she would step down as party leader). And Doug Ford, following the narrowest of wins in the leadership race against veteran Christine Elliot, is the new Premier-elect in Ontario.

With the final results tallied (8,410 of 8,419 polls as of Friday morning), the Ontario PC Party had captured 76 of the province’s 124 seats, with the NDP securing 40 seats, and the Liberals losing official party status by capturing just seven seats (eight seats are necessary to keep party status). It should be noted that the seven-seat result represents the worst showing by the party in provincial history. And in one of the biggest headlines of the night, Mike Schreiner, leader of the Ontario Green Party, secured the first seat for the party in history. The 58 per cent voter turnout is the highest in an Ontario provincial election since 1999.

The main reason for the result is concentrated in the Greater Toronto Area. Leading into the election, much of the ‘416’ and the ‘905’ was painted Liberal red, and now, is mostly blue.

For the infrastructure industry, the faces we have all been interacting with are all gone. The previous ministers of infrastructure (Bob Chiarelli), energy (Glenn Thibeault), transportation (Kathryn McGarry), health (Dr. Helena Jaczek), labour (Kevin Flynn), education (Indira Naidoo-Harris), and environment (Chris Ballard) were all defeated on the night, as was the previous long-time minister of transportation (Steven Del Duca).

From a strictly infrastructure lens, the election of an Ontario PC majority government could be good for Ontario.

In his first statement of the campaign, Ford outlined his plan for tackling transit, with an emphasis on boosting funding for transit expansion in the Greater Toronto Area. He pledged an extra $5 billion would be given to the city to help support transit expansion, which Mayor John Tory read as support for the construction of the Downtown Relief Line. The project is seen by major transit advocates in the region as the number one priority for transit expansion with the city limits. And at the same time, he would also upload responsibility of the Toronto Transit Commission’s (TTC) subway assets to the province, although the TTC would still hold responsibility for its day-to-day operation.

Outside of Toronto, Ford has expressed his support for the Stage 2 of the Ottawa LRT, all-day GO service to the Niagara Region, and support for regional initiatives in cities like London, Kitchener-Waterloo, Brampton, Mississauga and more. For Hamilton, Ford said in the month before the campaign that the community should ultimately decide whether $1 billion of the province’s money on light rail transit, which has been a divisive issue in the city.

Ford was also quick to push forward with the need to re-establish the Northlander train service, which provided passenger rail service north from Toronto to Cochrane with multiple stops along the way.

While Ford’s commitment to cutting wait times dominated his health care message during the campaign, he did make a few key announcements regarding existing and proposed hospital projects. On May 29th, Ford announced he would support keeping the Welland Hospital, and commit to a grant to explore the best health care services to provide in that facility. At the same time, he also committed to continue the province’s plan to build the new Niagara South hospital. During a visit to Brantford, he also discussed funding for a new hospital for the community, one that is not currently part of the Infrastructure Ontario pipeline.

On the high-speed rail front, Ford stated that he would continue with the environmental assessment for the proposed Toronto-to-Windsor high-speed rail. However, like the NDP, he was not prepared to commit to anything beyond that.

The questions will now surround the new faces that will represent infrastructure interests across the province. As stated earlier, there are seven ministries that have a significant impact on current infrastructure development in Ontario: infrastructure, transportation, energy, health, labour, education, and environment. There are key figures that seem to be locks for cabinet portfolios, but it would be difficult (and potentially quite irresponsible from a journalistic standpoint) to suggest anyone for those specific ministerial positions.

Stay tuned to renewcanada.net for news on the new cabinet ministers and critics that will represent the important portfolios that will influence the development of public sector infrastructure.