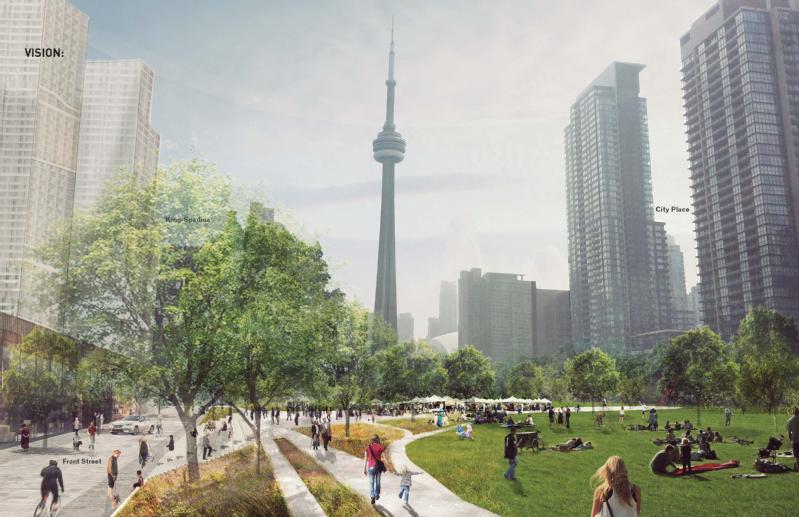 On January 23, the City of Toronto’s Executive Committee will consider a report to acquire about 1.2 hectares (three acres) of air space above the Union Station Rail Corridor to advance plans for Rail Deck Park, through continued negotiations or an expropriation if required. The air space the City is seeking is between Spadina Avenue and Blue Jays Way, south of Front Street West.

Negotiations with the owners to acquire air space in the Rail Deck Park project area at fair market value have been ongoing since 2018 with no success to date.

Rail Deck Park is a City-led proposal for a new park of approximately eight hectares (20 acres) above the Union Station Rail Corridor between Bathurst Street and Blue Jays Way. The downtown rail corridor area is the last remaining site suitable for a large park to support growth in the downtown and serve as a city-wide asset. Implementation of this park is intended to be phased to help manage the anticipated cost and complexity of the project.

Together with the City’s existing Northern Linear Park property, acquisition of the air space sought by the City at this time would give Council the opportunity to pursue the development of a new park of up to 1.6 hectares (four acres) of the proposed eight-hectare (20-acre) Rail Deck Park.

This portion of Rail Deck Park would be adjacent to the development proposal for “Union Park” from Oxford Properties Group Inc. The Union Park proposal, which is located to the east of Blue Jays Way, will result in a park of about 1.2 hectares (three acres), including 0.8 hectares (two acres) to be built above the rail corridor. The eastern portion of Rail Deck Park and the adjacent Union Park proposal would transform under-utilized air space into a combined park area of approximately 2.8 hectares (seven acres).

Subject to the actions of the Executive Committee, City Council will consider the item at its meeting of January 29 and 30. The agenda item is available at: app.toronto.ca/tmmis/viewAgendaItemHistory.do?item=2020.EX12.4

More information about Rail Deck Park is available at: toronto.ca/raildeckpark.

Images of Rail Deck Park are available at: toronto.ca/home/media-room/video-b-roll-images/rail-deck-park-images.