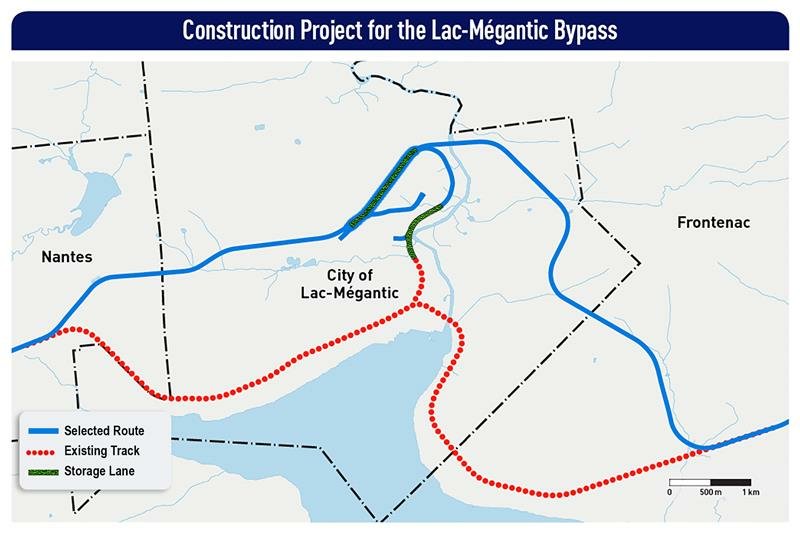 Transport Canada announced that the government still intends to complete the Lac-Mégantic rail bypass project in 2023.

“We achieved a number of milestones in recent months which have allowed us to move the project forward, despite many challenges, including those posed by the COVID-19 pandemic. Omar Alghabra, Minister of Transport. “To relocate railway operations to the Lac-Mégantic industrial park, as announced in 2019, we had additional engineering work done. This allowed us to deliver what residents and the mayors of Lac–Mégantic, Nantes and Frontenac wanted.”

The federal government and the rail operator, Canadian Pacific Railway, will start preparing plans and specifications in the coming weeks. Negotiations to acquire the lands will soon begin with the impacted property owners. A virtual information session will be held with them in the near future to answer their questions.

The construction phase is expected to begin in spring 2022. We are working with Canadian Pacific Railway to establish a schedule that will allow us to finish the project in 2023.

“From the start, our government has been committed to completing this project while maintaining open communication with the people of Lac-Mégantic, Frontenac, Nantes and the neighbouring communities. We are working hard to move this project forward within the established time frames. People can count on my support.”

On May 11, 2018, the Canadian and Quebec governments announced joint funding for the construction of the Lac-Mégantic rail bypass. The choice of the final route is based on a number of studies conducted as part of the feasibility study supervised by the City of Lac-Mégantic

Transport Canada is also working with the Waban-Aki First Nation and the Huron–Wendat First Nation, who, during the consultations, expressed their interest in participating in the archaeological studies.

Transport Canada is working with the Ministère des Transports du Québec and other partners to integrate into the project, the environmental measures specified by the Bureau d’audiences publiques sur l’environnement, and those identified in the project’s environmental assessment.

Canada invests in capacity to relieve supply chain congestion at the...