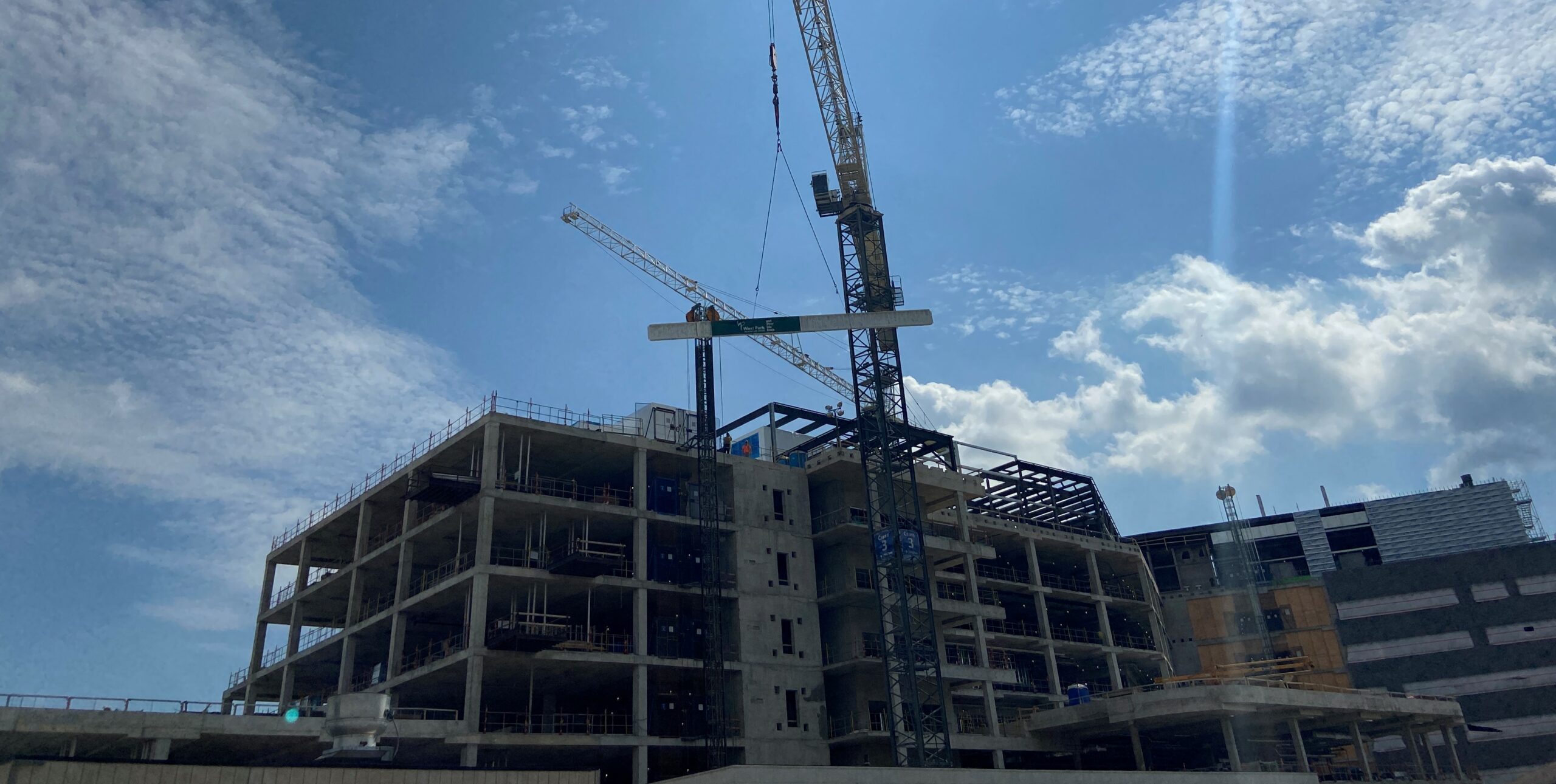 With the new hospital as a backdrop, about 75 guests including board members, staff, patients and family members gathered outside with masks on for the Beam Signing Ceremony on August 11. The Signing of the Final Beam is a major construction milestone, signifying the completion of the building structure.

“When these doors open, this new facility will provide residents here in the western GTA with access to the high-quality care they deserve…where and when they need it,” said Premier Ford. “Our government is fully committed to fortifying our health care sector, and West Park Healthcare Centre will play a major part in helping us achieve that goal.”

The 30 foot steel beam, painted white and draped with West Park banners on either side, collected about 400 signatures. The beam was then air-lifted by Crane 3, endearingly named Thunderbird, to the top of the new six-storey, approximately 730,000 square foot building that will overlook the Humber River valley.

Scheduled to open in 2023, the pandemic-ready hospital features a dedicated wing designed for airborne containment. West Park will have similar, smaller containment zones called Airborne Isolation Rooms (AIRs) placed throughout the hospital. The new facility will also feature a state-of-the-art HVAC system ensuring only 100 per cent fresh air is pumped in from the outdoors, eliminating the need for re-circulated air and removing the potential transmission of airborne pathogens.

“West Park’s century-long legacy of caring for people with tuberculosis (TB) made pandemic planning a priority from the start,” said Anne-Marie Malek, West Park’s President and CEO. “This milestone brings us closer to opening a cutting-edge facility that will be at the forefront in responding to future pandemics and continuing in our role in providing care to those with respiratory illnesses.”

With demand for West Park’s rehabilitative services expected to grow in the years ahead, the transformation and expansion of the campus of care will improve access to care and increase West Park’s capacity to serve the needs of Ontarians with various health challenges, traumatic injuries and chronic illnesses such as Chronic Obstructive Pulmonary Disease (COPD), tuberculosis (TB), amputations, strokes, neurological and musculoskeletal conditions.

“By investing in health infrastructure like West Park Healthcare Centre’s new hospital, our government is building capacity and ensuring our health care system is prepared to respond to any scenario,” said Christine Elliott. “Today’s milestone brings us even closer to opening a state-of-the-art hospital that supports innovative, high quality care for patients requiring specialized rehabilitative and complex care.”