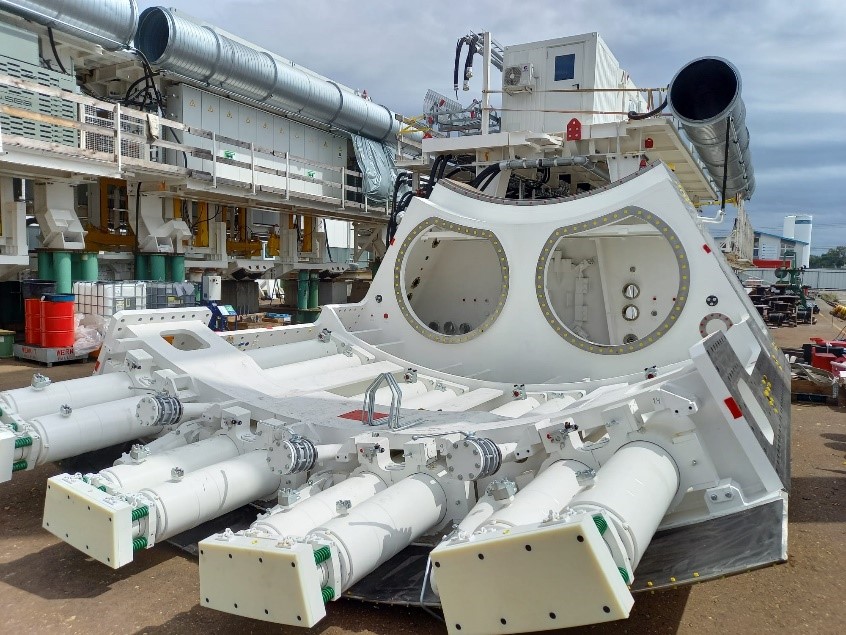 As crews continue to prepare the entry point for tunnelling of the Scarborough Subway Extension, workers from halfway around the world are building the project’s tunnel boring machine and getting it ready for its big journey across the Atlantic Ocean.

In a small German town bordering France, situated along the Rhine River, work is well underway to bring more subway service to the east end of Canada’s largest city. Take a first look at the mighty machine – which you could, in the future, actually name.

While work continues here at home to prepare the launch shaft for the Scarborough Subway Extension’s tunnel boring machine, workers in Schwanau, Germany, are busy manufacturing the machine itself, commonly referred to as a TBM.A big, single tunnel calls for a big tunnel boring machine – one that can build a tunnel with a 10.7 metre diameter, soon to be the biggest subway tunnel in Toronto. The 7.8-kilometre Scarborough Subway Extension will be the first subway project in Toronto to operate in both directions within a single tunnel, requiring only a single boring machine to create all the necessary space.

The TBM for the Scarborough Subway Extension is being manufactured by Herrenknecht, which has supplied tunnelling technology for underground infrastructure around the world, including major subway projects in the UK and around Europe.

For the past few months, teams at Herrenknecht’s manufacturing facility in Schwanau have been busy preparing a custom-built TBM for the Scarborough Subway Extension. Today, Metrolinx is sharing an exclusive sneak peak of the TBM being brought to life half a world away.

After teams complete quality control and testing at the Herrenknecht facility, at the end of September, they will dismantle the massive machine. Due to its size, the machine will travel in multiple shipments, all making their way to Canada by boat. Metrolinx News will be your one-stop shop for the latest updates as the TBM and its many parts travel across the Atlantic Ocean and make their way to Scarborough.

Arriving Next Year
The TBM shipments are set to arrive on Canadian shores in early 2022 and will then travel by truck to the launch shaft site in at McCowan Road and Sheppard Avenue, where crews will re-assemble everything.

Later in the spring, they will lower the assembled machine into the ground so it can begin tunnelling its way south under McCowan Road, digging about 10 metres of tunnel daily.

After completing this leg of its journey, workers will remove the machine from the ground at an extraction shaft that will be built at Midland and Eglinton.

Featured Image: The section of the stationary shell of the tunnel boring machine which contains the pushing rams. (Herrenknecht photo)