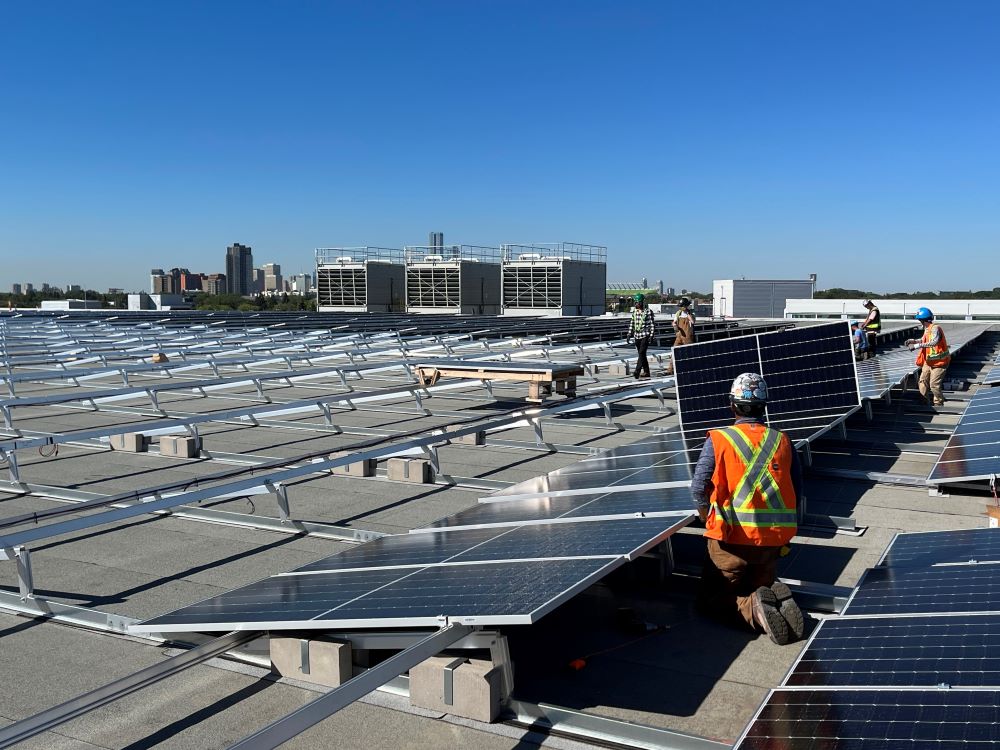 The City of Edmonton announced that the Edmonton Expo Centre will soon be home to the largest rooftop solar array in the country.

“The City of Edmonton is committed to becoming an energy sustainable and climate resilient city,” said program manager Brad Watson. “This rooftop solar panel array will generate at least 2.8 gigawatts of energy annually, equal to that of about 375 homes.”

Based on the design energy models the array is anticipated to yield operational savings in the realm of $290,000 to $460,000 per year.

“Our new rooftop solar installation means that we will be producing our own renewable, clean solar energy right here on top of our building,” said Melissa Radu, Director, Social & Environmental Sustainability with Explore Edmonton. “It also acts as a reminder, to Edmontonians and visitors to our city, that Edmonton is a leader for innovative energy technologies in our country and that we are working hard to support a transition to a lower-carbon economy.”

While other buildings around the City of Edmonton have solar arrays or are having arrays built, the Edmonton EXPO Centre presented a unique opportunity to create one of this size.

“The Edmonton EXPO Centre is a unicorn of sorts when it comes to rooftop solar panels,” said Watson. “Its size and dimensions, unobstructed sightlines and lack of interfering rooftop infrastructure allowed us to build an array of this size.”

The solar system is expected to have a lifespan of at least 25 years and will yield a payback between 10-17 years, considering energy prices and whether energy consumption aligns with generation.

If approved, Phase 2 will see additional panels installed across Halls A through C, increasing the footprint of this project as well as significant cost savings. Phase 2 will add a production of approximately 1.9 gigawatts to the system and the estimated cost is roughly $3.4 million. Phase 2 would add an additional saving of about $185,000 to $300,000 per year.

Phase 1 is expected to be complete in November.

This project is one of 11 solar projects currently underway in Edmonton, helping the City achieve its goal of increasing energy efficiencies. There are currently six City solar arrays in operation.

This solar installation is part of a $98 million rehabilitation project at the Edmonton EXPO Centre. On top of the solar project, visitors will see improvements to seating in Hall D and updates to Entrance 6 on the north side of the building. Improvements are also being made to the building envelope, and mechanical and electrical systems, including major equipment replacements in the mechanical and electrical rooms. The Edmonton EXPO Centre will remain open during work.