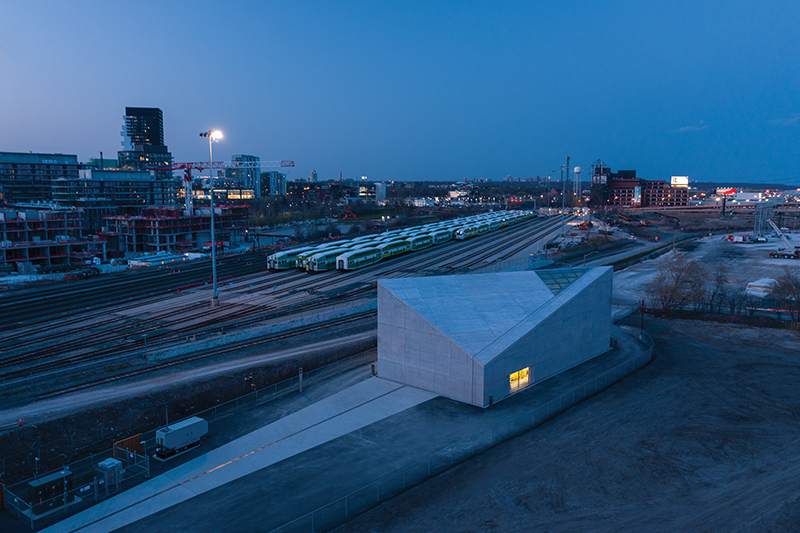 An award-winning design marks an auspicious start to any project. But when the architecture is daring and the structure must house an innovative stormwater system in a never-before-executed configuration, complete with a seven-year delay between design and construction, then clearly there will be some challenges. These challenges were handled, construction and engineering ones were overcome, and Waterfront Toronto, in November 2021, began final testing of its new Cherry Street Stormwater Management Facility. Each of these indicate that the project is achieving success—but also offers lessons to be learned.

“The Cherry Street Stormwater Management Facility is a small piece of the City of Toronto’s large program to ensure that stormwater discharged into Lake Ontario is treated,” explains Ilidio Coito, project director, Infrastructure & Public Realm with Waterfront Toronto, a tri-government organization that is stewarding Toronto’s waterfront revitalization. “Any trunk pipe, anything that goes into the lake, needs to be converted to where it gets treated to about 98 per cent.” Treating such runoff water is part of an even larger environmental program in which all stormwater discharges from Toronto’s buildings—including roofs—are treated before even going into the stormwater system (or preferably being put to other uses such as irrigation).

The Cherry Street Stormwater Management Facility was conceived to handle stormwater from Toronto’s West Don Lands, East Bayfront and Quayside—everything south of Lakeshore. “This was the first facility of its kind, and since then others have been built, and there are more to be built on the Port Lands,” explains Coito. The facility also sends approximately 25 per cent of its water to the Shelbourne Common UV Treatment Facility for additional treatment and use in the fountains and water features in the park, before it is directed into Lake Ontario.

The project’s complexities were significant but were initially overshadowed by the remarkable exterior design, which was approved in 2011. The facility would pump untreated water from the existing 20-metre diameter, 26-metre deep West Don Land Stormshaft (which also serves a temporary surge storage function), via new underground piping, to the new, 650-square-metre building. This is an extremely small space to handle the expected stormwater volume of up to 1,450 litres per second when compared to other stormwater management facilities. Accordingly, engineering consultant R.V. Anderson Associates Ltd. incorporated some of the latest technology into the treatment process to maximize the limited space  in the building.

Typically, a conventional gravity screen separator removes sediment, debris and oil from the water. Then, the second step, clarification, usually needs a lot of space, often including open-air ponds. Instead, the Cherry Street Stormwater Management Facility adopted “ballasted sand flocculation.” This is an innovative process that adds sand and hydro-cyclones to stimulate and speed up the settling of suspended solids so the clarified water can quickly flow onward, reducing the space required for clarification. Third, the water is subjected to standard UV light disinfection, before being pumped back as clean water to the stormshaft and out to Lake Ontario. Lastly, recovered solids are periodically removed from the stormwater management facility and sent to a wastewater treatment facility.

“The overall footprint is very small, and to get all that technology in a small area is very impressive,” says Raymond Deasy, Graham’s project manager for the facility’s construction. “Typically, the large flow volume involved requires a larger building, and achieving that footprint was challenging.” Coito adds, “The designers felt the scale of the facility as planned was enough for the equipment. But it’s a very complex system to take care of the water: the process is complex, there are a lot of pumps, a lot of moving parts, and it’s the first facility that has all these components together.”

Being situated in a showcase development zone of a world-class city, the packaging of these utilitarian tasks needed to demonstrate design excellence. The city wanted a landmark, and the Cherry Street Stormwater Management Facility was expected to display panache and sophistication, reflecting Toronto’s contemporary design and urban living values. The structure became angular rather than cubic and the exterior was embellished with etchings acting as rain channels running down roof and walls. Glazed openings in the façade would reveal the system’s inner workings by day and become softly glowing features by night.

The design proved sensational, winning no fewer than three significant awards for its architects, gh3* of Toronto. In 2011, the Cherry Street Stormwater Management Facility became one of eight recipients in the Canadian Architect Awards of Excellence. In 2021, Azure Magazine ranked it No. 3 out of 10 great designs around the world, calling the facility “a strikingly simple choreography of elements.” And in July 2021, it received a Special Jury Award of Excellence for Inspiring Infrastructure in the Toronto Urban Design Awards, which stated, “This sublime and sculptural form creates a strong presence at a prominent trailhead well-used by cyclists and celebrates a commitment to high performance in water quality.”

There were some design changes along the way. “Initially the plan was to have three different shafts for the stormwater conveyance, but that would take up a lot of room along Bayside, so then the process led to combining everything into one facility with the water being pumped, and that required a redesign,” says Coito. In addition, he adds, “The original building design was supposed to be a concrete shell with cladding, but the costs went up, so then we went to exposed concrete.”

In June 2018 Graham was awarded the $22 million bid-build general construction contract, responsible for managing all the concrete, mechanical, electrical and undergrounds up to commissioning. A separate project management consultant oversaw Graham and the other consultants for the project. Graham began work almost immediately. “In brief,” explains Deasy, “Our tasks were to build the facility, build the undergrounds that take the untreated stormwater from the shaft to the facility, and back again taking the treated water for discharge, upgrading an existing sewage pumping station within the area, and housing the upgraded control systems within the new stormwater facility.”

While that sounds straightforward, Deasy says that “the building itself was unbelievably challenging to build.” Built entirely of cast-in-place concrete and lacking large entrances, not only construction equipment but building systems like HVAC had to be prepositioned within the footprint before the walls went up, which required additional scaffolding and bracing to work around. During construction, as the designers realized that normal construction processes would result in concrete seams and bore joints being offset irregularly, they requested for aesthetic reasons that all the seams and bore joints be aligned and equally spaced.

“That created another challenge because we had to customize a lot of panels on the roof,” recalls Deasy. “Those modifications took a lot of time, and to do that while shoring over the equipment was a massive challenge.” Pouring self-levelling concrete on double-sided forms became a further one. The planned skylight was also moved from its original location. “The building is very much design-driven, function being fit to the form, rather than form following function,” says Deasy. “We accommodated all of it as best we could.” Due to these challenges, the original completion was extended twice to March 2021, when substantial completion was achieved.

Unfortunately, the facility did not operate as engineered upon substantial completion. The mechanical system’s three pumps and pipes moved far too much water for the compact treatment system to handle. And while the treatment system functioned when run manually by an onsite operator, it was intended to be fully automated. Work on both issues continued over the summer and into the autumn. “There was definitely frustration at not having it run properly,” says Coito. As of early November 2021, the pumping volume and control issues had been resolved and the facility has undergone a full running test with all consultants and contractors present.

From Coito’s standpoint, the more than 10-year-long process offers two lessons that might save time and smooth the work on similar future projects. “For this kind of project, a design-build contract that aligns those two major providers would probably have been better,” he says. More broadly, on any project involving significant innovation, all parties should recognize that added risk is intrinsic, and that things “going wrong” should not come as a surprise. “The planning component should have incorporated a more extended commissioning period to account for the fact that a project of this nature will require extended testing and fine-tuning,” says Coito.

“My impression of Graham is highly satisfying,” says Coito. “Their on-site team was very good. They were always transparent and open to the discussions. They were very cordial, very professional, always controlled. Our executives appreciated that. We were able to reach agreement on a number of things. A lot of things were very positive.” From Graham’s standpoint, says Deasy, “The Cherry Street Stormwater Management Facility has been a success for Graham. We constructed an architectural showpiece for a new client, and it was one of our first projects in downtown Toronto. We developed relationships with a lot of new trades and expanded our water and wastewater portfolio in Ontario.”