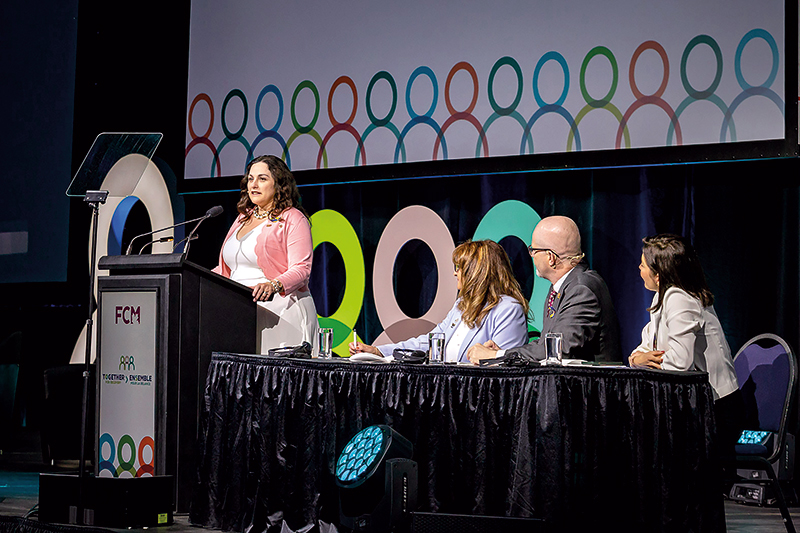 For the FCM’s Taneen Rudyk, now is the time to engage and empower Canadian municipalities

The Federation of Canadian Municipalities (FCM) brings together more than 2,000 municipalities of all sizes—representing 92 per cent of Canadians. Together with its members, the organization strives to help local leaders build better lives. One of these key leaders is FCM president Taneen Rudyk, a four-term councillor for the Town of Vegreville, Alberta.

Rudyk, who was first elected to council in 2010 and was elected to the FCM Board of Directors in 2017, has held several different positions—including co-chair of the Social Economic Development Committee, co-chair of the Conference Planning Committee as well as chair and vice-chair of the Increasing Women’s Participation in Municipal Government committee. She has also served as the governance representative for the Towards Parity in Municipal Politics initiative, and as FCM interim vice-president.

While demonstrating that she’s a strong advocate for the vital role of Canada’s small towns, she continues to be an active volunteer currently devoting her efforts towards supporting adults with exceptional needs as well as refugee sponsorship. She’s also proud to have raised four children to be creative and kind citizens.

ReNew Canada spoke with Rudyk about a range of FCM’s focus areas—including infrastructure, housing, sustainability, and inclusivity—and it quickly became apparent that her hard work and small-town values have led to a strong desire to support her members in making big municipal improvements across the country.

How did your educational background and work experience inform your current role as the president of FCM?

I’ve always been interested in debating important issues that are close to the heart. One of the main things I learned from my education is to make sure to listen and understand where people are coming from and not to pre-judge. It’s important to do your homework and find out about people’s beliefs and try to anticipate their motivation for reacting and believing the way that they do.

The Alberta Elected Officials program was an excellent education in terms of providing me with the technical details that were important to understand—including the dichotomy of large urban centres versus suburban and rural centres and seeing how we can all work together as neighbours. The most important thing to keep in mind is that people are generally just looking for the best possible life, and we must help everyone achieve their goals.

Who are some mentors that have inspired you on your career path in municipal governance and as Councillor for the Town of Vegreville?

I was always interested in politics and community-building, and I was active as a volunteer, spending a good portion of my weeks supporting the community at the school and local levels. The two mentors encouraged me to run had two different styles: one recommended I take the Alberta Elected Officials program. Another had a different approach that was no nonsense; they would rather miss an education course if it saved the taxpayers a penny. This was another lesson to me in how it takes different views to make a strong municipal government—both mentors were working on building community in their own ways.

What are guiding principles that help you carry out your duties and bring out the best in your board of directors at FCM?

Acting with integrity and making space to allow for differences is critical. And that is particularly important right now. People have gotten uncomfortable with disagreeing with each other in the right way. I’ve got a colleague who says: “Be hard on the issues and easy on the people.” I like that. The board of directors is made up of amazing leaders and it is my job to allow them to shine, to use their strengths to the best effect. We need to provide a platform so that people see politics are still relevant and that we are a trustworthy board working everyday to make their lives better. We have so many inspiring leaders across the country.

How do you actively and inclusively shape policy priorities that reflect the concerns of municipal governments and affiliate members?

FCM has a structure and an executive that is made up of representatives across the country. We’ve got provincial, territorial, and executive associations and representations from specialty caucuses, so we can have an accurate account of what’s happening across the country. We also have the ability for members to attend executive meetings. Our staff are so incredibly competent at supporting members and vetting their initiatives. We also have workshops, for example, on how to apply for grants such as the Green Municipal Fund or to protect yourself on digital platforms and to encourage women to run for public office.

See also  In a SNAP

We’re making sure we’re relevant in terms of how we’re shaping our initiatives, because the conversation changes and we need to capture key issues across the country so we can advocate to the federal government in a way that’s meaningful. In fact, we actively adopted a statement in support of inclusivity at a recent board meeting.

Our organization has been around for over 100 years, but we are evolving and demonstrating that we can show leadership. It’s challenging because many of our members are small, and they have a handful of staff. We can only use the board that is elected so we need to encourage levers of powers to be accessed by a number of players. We’re not there yet, but we’re working to have multiple voices included around the table.

What are the key municipal infrastructure issues that need more attention moving forward?

Our towns and cities are growing quickly and that’s a good thing, but infrastructure is having a tough time keeping up with that. We don’t have enough affordable and high-density housing to keep up with demand so as a result we’re facing a housing crisis that has been generations in the making. And that’s happening while our public transit systems aren’t developing fast enough to be able to connect people to the places that they need to get to, leaving roads congested and compromising our environment. Municipal hubs and communities centre and libraries are often small and old and can’t keep up to rising demand. Also, it’s a big country and we have several people in remote and rural areas and they need to be more connected. We need consistent sources of core funding for all of that. Investing in infrastructure is more than just the roads and the buildings, it’s the foundation on which every Canadian is built and how economy functions. And we need to get on that path to net zero.

We need to be more intentional in a number of different ways. So, we’ve been very active in our advocacy to the federal government with regard to key focus areas for infrastructure: we want a doubling of the Canada Community Building Fund; better climate resilience through $2 billion for climate mitigation and $1 billion annually for next 10 years to keep up with flood, fire and drought; an investment of $1 billion annually for next 10 years municipal waste and water infrastructure; and some key design considerations for a permanent public transit fund.

We’re at a critical time right now. A lot of these critical funding pockets are coming to an end. There are fissures in the system so when we’re at the table we need to solve these problems in an intentional way.

How could the Green Municipal Fund (GMF) have a greater impact, especially when it comes to critically needed climate adaptation?

The FCM GMF is doing incredible work and it continually assesses the needs of the federal government. We continue to find different ways to do what we do better. We’re currently limited under the negotiations of this agreement and we’re always looking to evolve so we can deliver the biggest impact. Sustainable procurement is important; if we don’t do it right the first time, it’s a retrofit before it’s even started.

It’s also important to undertake capacity building and make these funds more accessible for smaller communities. Our municipal asset management program manages the data and can advise on how to move forward. One size doesn’t fit all and it’s important to support the creativity and ingenuity of the various communities.

There’s nothing permanent in politics except change. It’s a really important time for municipal government. It’s through challenge that we find opportunity and at this precipice when people are feeling disheartened and disengaged, we offer an opportunity to be able to feel empowered and connected once again. I’m so proud of the work that we’ve been able to accomplish during the pandemic. In the next few years, it will be incredibly important that we get these conversations right and the only way we can do that is by having multiple voices involved.

FCM’s recommendations to build back better