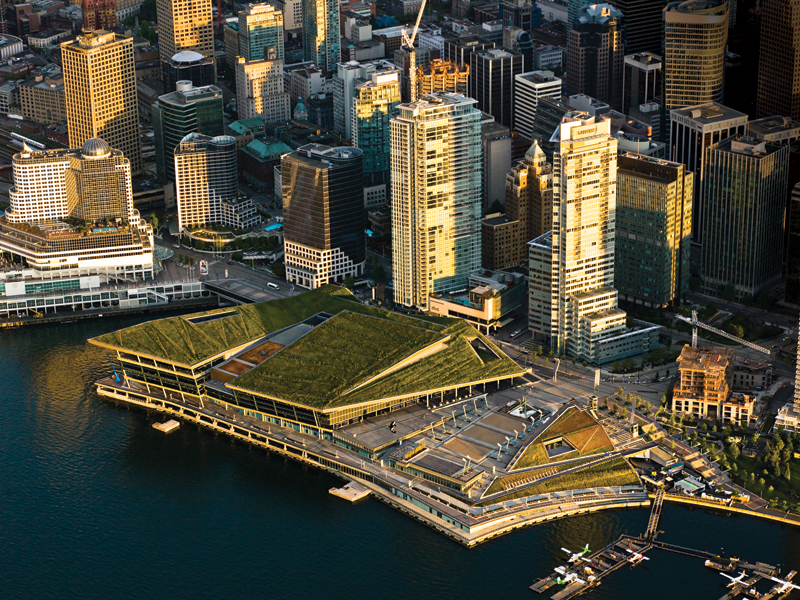 As cities grow, they get hotter—and without proper mitigation efforts, they are projected to heat up even more. Researchers at Arizona State University and the U.S. Environmental Protection Agency (EPA) recently conducted atmospheric modelling studies of future development across six U.S. regions. They report a rise of near-surface temperatures, independent of global warming-induced temperature change, by 1°C to 2°C in all regions, with some metropolitan areas rising more than 3°C by 2100.

Commonly referred to as the urban heat island (UHI) effect, this phenomenon occurs when communities remove vegetation and replace it with pavement and rooftops. These surfaces convert the sun’s energy into sensible heat, which increases air temperatures. In addition, enormous volumes of contaminated stormwater and snowmelt are captured by these impervious surfaces and conveyed to oceans, lakes, and rivers; in many cities, this runoff mixes with sanitary sewage, resulting in discharges that pose significant ecosystem and human health risks. Living green infrastructure composed of vegetative technologies and structural soils, on the other hand, captures, retains, and slows stormwater and snowmelt and then uses the sun’s energy to convert much of it into water vapour rather than sensible heat through the cooling effect of evapotranspiration.

The projected worsening of the UHI will have even greater negative impacts on infrastructure planning and development, land use, and quality of life. According to the EPA, a 1°F (0.6°C) reduction in temperature can, conservatively, reduce peak electricity demand by 1.5 to two per cent. In Ontario, the increase in UHI-attributed cooling demand is closer to four per cent per 1°C rise.

Fortunately, there are proven methods of mitigating the UHI, including porous and reflective pavements, and urban forests. In their study, Arizona State and EPA researchers limited their study to modelling each of the six regions for the potential impacts resulting from the widespread implementation of green roofs, cool roofs (which are highly reflective of the sun’s energy), and a combination of the two. What they found is that these adaptation strategies are not one size fits all—there are trade-offs to be made in different regions.

The green-cool roof combination outperformed the green and cool-roof-only simulations in terms of overall cooling impact. The cool-roof-only scenario worked marginally better than the green-roof-only scenario, particularly in drier climates like southern California (1.2°C better). Using cool roofs in colder climates also resulted in increased energy demand for wintertime heating (1.5°C cooler in mid-Atlantic Region), thereby eating into the energy saving benefits of summertime cooling. Cool-roof implementations also resulted in a pronounced decrease in precipitation along a corridor from Florida to the northeastern United States, which has implications for water demand and scarcity, power generation from stream flow, and aquatic ecosystems. Green roof implementations were found to help increase precipitation levels for the mid-Atlantic and the Chicago and Detroit regions.

The more widespread use of living green infrastructure technologies can provide opportunities to address other pressing health and economic issues. What these models don’t take into account is the potential cooling benefit of the widespread use of green walls, particularly green facades that utilize climbing plants to improve evapotranspiration rates in cities. Furthermore, green roofs provide a range of active recreational activities, facilitating a more effective use of limited space in cities; the elevated High Line in New York City and Millennium Park in Chicago are but two projects that have significantly spurred nearby developments.

Incorporating nature into a development delivers significant benefits, according to research conducted by Bill Browning of Terrapin Green, a green building development consultancy in New York City. According to Browning—who is a keynote speaker at the upcoming Grey to Green Conference on the Economics of Green Infrastructure in Toronto in August—accessible and even viewable green roofs and walls contribute to increased property values, higher rates of productivity in employees, faster rates of healing in hospital patients, and less absenteeism. Designing with nature in mind, it turns out, has multiple bottom-line benefits associated with the health and well-being of the people who use the building. Human health and productivity benefits can often dwarf the impact of those associated with building operational savings.

Green and cool roofs reduce air conditioning energy use by pre-cooling intake air and have been found to improve the efficiency of roof-mounted solar panels by preventing them from overheating. Green roofs and walls are also emerging as new opportunities for commercial and non-commercial urban farming, which provides much needed employment in urban centres and, if implemented at a significant scale, could help to offset carbon and water-intensive fresh-food imports.

The Arizona-EPA study makes it clear that business as usual will not produce future development scenarios that are healthy or economically optimal. Yet despite growing evidence of the importance of reducing the UHI, most utility regulators have yet to implement aggressive programs to address it.

Steven W. Peck is the chair of the Green Infrastructure Ontario Coalition.