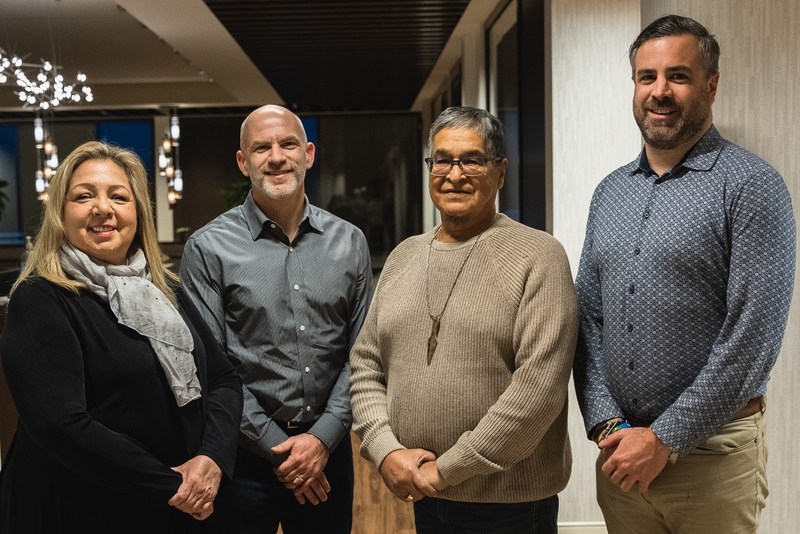 At a ceremony in Thunder Bay, Lac des Mille Lacs First Nation and Hydro One Networks Inc. signed an equity agreement on the Waasigan Transmission Line project.  Lac des Mille Lacs First Nation is one of nine potential partner communities that could own up to 50 per cent of the Waasigan Transmission Line in partnership with Hydro One.

“Lac des Mille Lacs First Nation is very pleased to announce that we have formally signed this agreement with Hydro One. We acknowledge the many hours of negotiations and hard work that went into this initiative and thank everyone involved. This is an outstanding example of what industry and First Nations can accomplish when they work together. We look forward to a successful partnership on this project and to continuing our respectful and mutually beneficial relationship with Hydro One into the future,” said Chief Whitecloud, Lac des Mille Lacs First Nation.

“Lac des Mille Lacs First Nation and Hydro One have worked together over the past several years to reach this important milestone. We value and respect the relationship we have formed with the Nation, who also played an instrumental role in advising us on both the Waasigan Transmission Line project and Hydro One’s new 50-50 equity model with First Nations,” said Andrew Spencer, vice president, Transmission & Stations, Hydro One. “The equity agreement we signed demonstrates how we are partnering with First Nations to attract economic opportunities to the north while ensuring that Ontario’s grid is clean, reliable and resilient.”

Earlier this fall, Hydro One announced its new equity model that will offer First Nations a 50 per cent equity stake in all future large scale capital transmission line projects with a value of more than $100 million, transforming the benefits of infrastructure development for First Nation communities for generations to come. Hydro One has previously signed an equity agreement with eight of the nine First Nations impacted by the Waasigan Transmission Line.

Waasigan is a new transmission line that will bring additional power to the region supporting economic growth by bolstering capacity in northwest Ontario by adding 350 megawatts of capacity to the region with a new double-circuit 230 kilovolt (kV) transmission line between Lakehead Transmission Station (TS) in the Municipality of Shuniah and Mackenzie TS in the Town of Atikokan, and a new single-circuit 230 kV transmission line between Mackenzie TS and Dryden TS in the City of Dryden. Completion of the line is contingent on stakeholder consultation and regulatory approvals.