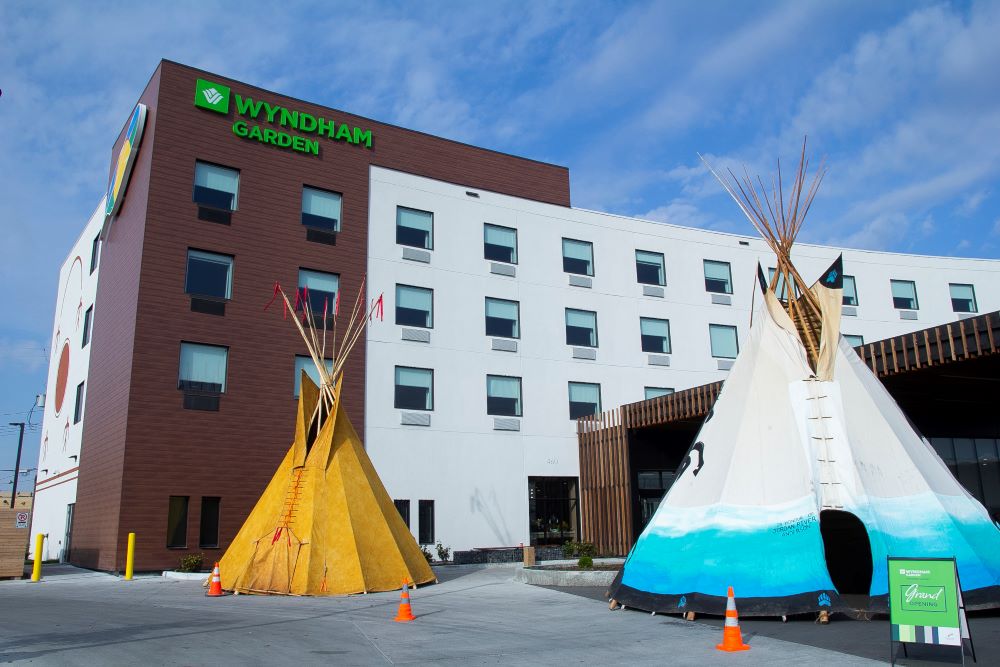 The 132-room facility is the first Indigenous-owned hotel in the Wyndham Garden group and just a couple of city blocks from Polo Park shopping centre. The grand opening marked a successful design-build project built by local contractors PCL Construction and designed by f-BLOK architecture inc.

“Long Plain First Nation has succeeded in building a hotel on an urban reserve that both achieves a world-class brand standard and embeds Indigenous cultural meaning throughout,” said Brock Klassen of f-BLOK architecture inc. “The building serves its’ guests every need and also immerses visitors in a cultural experience – one cannot miss the fact that they are on Treaty 1 Urban Reserve land when they visit this hotel.”

“In 2006 Long Plain First Nation purchased the land on Madison. The purchase from Manitoba Hydro was part of a fulfilment of Canada’s outstanding treaty land entitlement to Long Plain First Nation dating back to 1994. The three acre Madison property was officially set aside as a reserve in 2013 and Long Plain immediately established commercial business, which brought in revenue to support various social programs and created many opportunities for employment. We began our discussions with PCL in 2015. With their help we were able to proceed with our custom built Wyndham Garden Hotel. This is the largest project our Nation has completed. We are grateful to have partnered with PCL and for their commitment to exceeding our expectations,” said Cindy Allard, Long Plain First Nation.

The hotel is owned by Long Plain First Nation and will be operated by Sparrow Hotels.

“The vision of Long Plain First Nation and Arrowhead Development Corporation is an inspiring model for urban Indigenous development in Winnipeg and across Canada,” said PCL vice president and district manager Kelly Wallace. “It represents a step forward for First Nation’s economies and communities across Canada.”