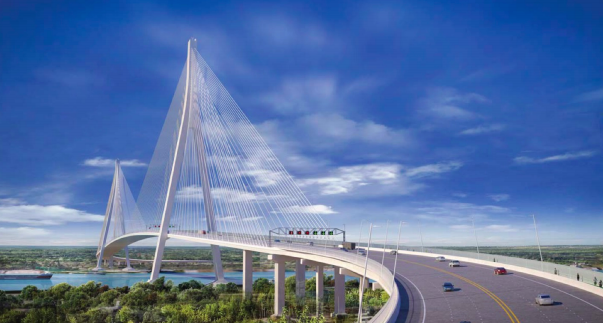 Bridging North America has been named as the preferred proponent to design, build, finance, operate, and maintain the Gordie Howe International Bridge project. The 853-metre cable-stayed bridge is being touted as the largest of its kind in North America.

“This is a project that successive governments of all stripes, on both sides of the border, have worked to achieve for many years,” said Amarjeet Sohi, minister of infrastructure and communities. “Today’s announcement of Bridging North America as the Preferred Proponent for the Gordie Howe International Bridge is a significant milestone and something for which all those who have contributed to this project over the years can be proud.”

Bridging North America was selected following a rigorous evaluation of the proposals submitted by the three Proponent teams invited to participate in the Request for Proposals (RFP) stage. The criteria evaluated included: project schedule management, the design and build approach, durability of the infrastructure, community benefits, operation, maintenance and rehabilitation plans, measures to ensure compliance with architectural criteria, and the robustness of the financing plan.

The technical and financial proposals were evaluated by subject-matter experts with extensive engineering and financial expertise and, as with the entire P3 procurement process, the evaluation was overseen by an independent fairness monitor who provided an independent opinion confirming the fairness, openness and transparency of the process.

Over 60 subject-matter experts undertook a rigorous evaluation process, putting in countless hours, to reach today’s decision,” said André Juneau, interim CEO of the Windsor-Detroit Bridge Authority. “WDBA looks forward to the completion of the procurement process and to the start of construction later this year.”

Over the coming months, WDBA will negotiate final contract details with Bridging North America. The cost of the project, design details and expected construction schedule will be announced publicly following financial close which is expected by the end of September, signaling the contract has been awarded and signed.