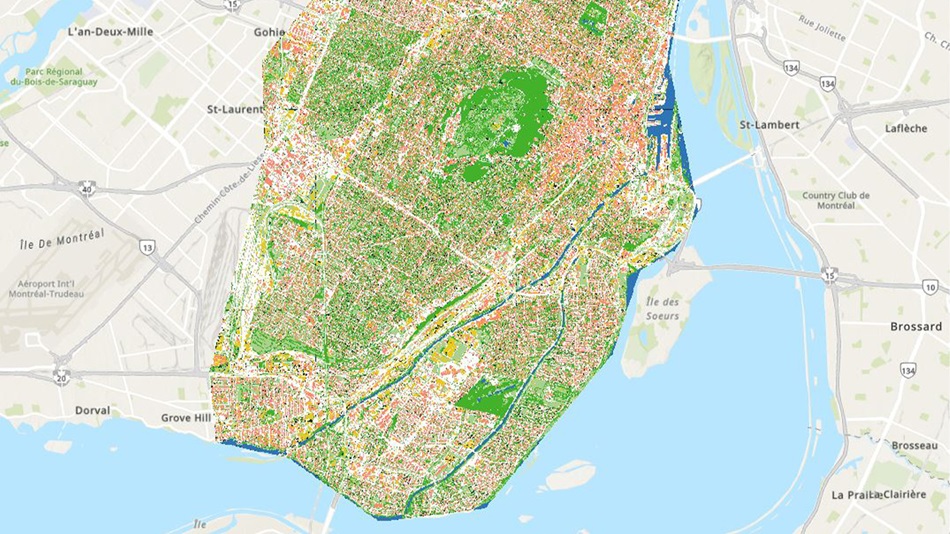 Montréal emerges with a ranking of 29%, which places it in the fourth rank among the most “sponge-like” cities. The ranking measures cities’ natural ability to absorb rainwater. This places Montréal’s urban center just behind Mumbai, New York, and Singapore, at 30% jointly, and well ahead of London and Sydney which rank bottom, with 22% and 18% respectively. The ranking for Montréal adds to Arup’s Global Sponge Cities Snapshot, which profiles a dozen major cities – including London, Sydney, New York, Shanghai, and Singapore, among others – and demonstrates the value of focusing on blue-green infrastructure solutions such as parks, wetlands, and trees as an alternative to concrete and grey stormwater infrastructure. Research from the World Economic Forum also shows that blue-green infrastructure solutions are not only extremely effective in managing water, but also on average are 50% more cost-effective than man-made alternatives, delivering 28% more added value. While all cities have an inherent “sponge” quality, their “sponginess” is a baseline absorbency indicator that can be improved through strategic interventions.

In Montréal, data shows the city’s “sponginess” ranking is boosted by the fact that its green spaces contain a high proportion of trees, including the iconic Mount Royal Park. This park, along with many others in the city, is a naturally spongy green space that goes a long way in mitigating the impact of more frequent summer rainstorms. The urban forest also provides numerous co-benefits ranging from provision of natural habitat to reduction of urban heat island effects, promotion of recreation to nurturing wellbeing.

The increase in wintertime rainy days is a particular threat to Montréal and other northern cities. Global warming is causing temperatures in cold climate cities to increasingly hover around the freezing point. Instead of snow, rain is beginning to fall more regularly on densely compacted frozen ground. Water absorption is impeded in these types of winter conditions, causing rainwater to flow across the surface, presenting a new winter flood risk for northern cities. Implementing nature-based solutions that actively manage stormwater can improve the absorbing capacity of compacted frozen ground.

“Cold climate cities must design nature-based solutions to better absorb water, acting like a sponge even when temperatures drop below freezing. Well-designed blue-green infrastructure can absorb water even in cold conditions. Healthy soil and root ecosystems create a layer of heat, trapped between the soil and snow, becoming a more effective ‘sponge’ and contribute to the city’s resilience,” added Ormsby.

In addition, blue-green infrastructure can be precisely designed to overcome the burden of salted run-off from winter de-icing practices. Proper siting, inlet protection and salt-hardy plant selection are but a few of the measures designers can adopt to ensure nature-based solutions can survive and thrive despite harsh winter conditions.

The study area includes approximately 150km2 of the Island of Montréal, spanning from the Saint Lawrence River in the south, including Verdun and the Southwest Borough; the Olympic Stadium in the East; the Trans-Canada Highway in the North; and the CN Rail intermodal yard in the West. Within this area is notably Mont Royal Park and the Central Business District.

The Future is Now: Infrastructure’s Role in Economic Recovery