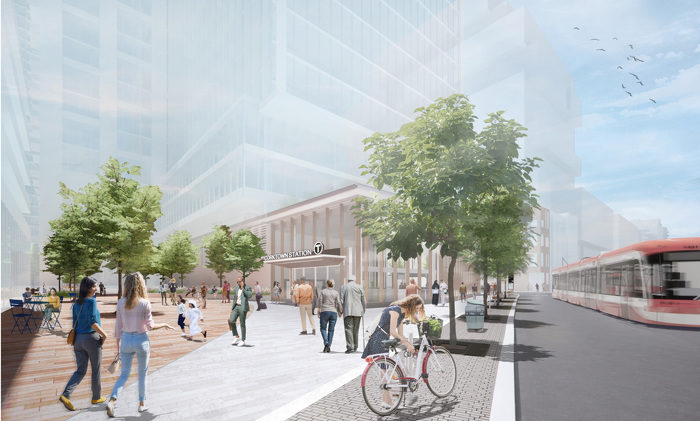 The Ontario government has initiated discussions and shared preliminary plans with the City of Toronto to build two proposed transit-oriented communities located at the future East Harbour Transit Hub and Corktown Station along the new Ontario Line subway.

Municipal review of these preliminary proposals has formally commenced, and the province will host public consultations with local communities, Indigenous partners, and stakeholders starting in the summer of 2021.

A preliminary set of concepts proposes a transformation of the 38-acre East Harbour development site into a transit-oriented community that would include the creation of a major employment centre expected to bring more than 50,000 jobs to the area. The proposal also includes a diverse range of residential space and community amenities surrounding a multi-modal hub or a Union Station of the East that would bring GO rail and SmartTrack station services, Ontario Line subway service and a future TTC streetcar extension.

The transit-oriented community proposal for Corktown Station offers a dynamic community with housing, jobs, commercial uses, and community spaces, such as a library, connected to the Ontario Line subway and TTC bus and streetcar services. In recognition of the historical significance of the land, the province will work closely with the City of Toronto, stakeholders, the community, and Indigenous partners to collaborate on a meaningful plan to commemorate the rich heritage of Canada’s First Parliament site.

In February 2020 the Ontario government and the City of Toronto signed a Memorandum of Understanding on Transit-Oriented Development establishing a joint commitment to seek transit-oriented opportunities based on stated objectives that deliver needed critical infrastructure projects at a lower cost to taxpayers.

“Our government is committed to working together with our municipal partner, the City of Toronto, and landowners to deliver critical transit solutions, while also supporting other essential infrastructure needs in the city,” said Surma. “Together, we will bring to life a shared vision for these future subway stations, providing new opportunities for people to live, work and play close to environmentally friendly rapid transit.”

On July 21, 2020, Ontario passed the Transit-Oriented Communities Act, to enable the construction of vibrant communities centred around transit stations along the routes of the province’s four priority subway projects.

In February 2020, Ontario signed the Ontario-Toronto Transit Partnership Preliminary Agreement with the City of Toronto to deliver on the unified plan to significantly expand and modernize the subway network across the Greater Toronto Area.

In April 2019, the province announced its historic new transit vision, with a preliminary estimated cost of $28.5 billion. This includes the largest subway expansion in Canadian history with the all-new Ontario Line; a three-stop Scarborough Subway Extension; the Yonge North Subway Extension; and the Eglinton Crosstown West Extension.