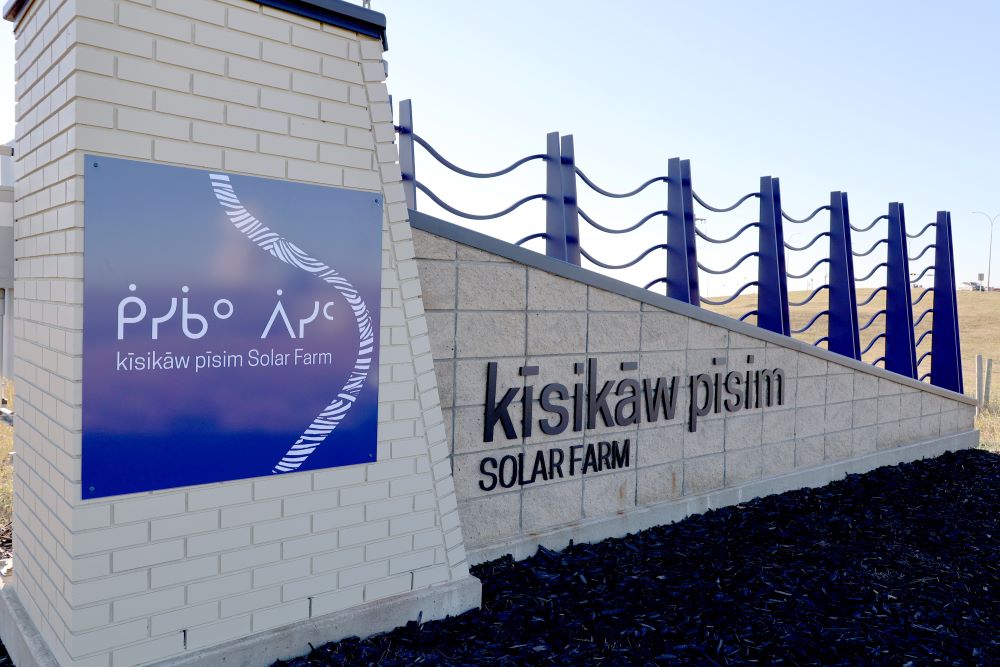 The City of Edmonton and EPCOR announced that The kisikaw pisim solar farm is now in operation – generating renewable electricity to help power the E. L. Smith Water Treatment Plant.

The solar farm will provide up to half the energy required by the plant, which supplies 65 per cent of the water required by Edmonton and surrounding communities.

With 30,350 solar panels capturing energy from the sun, the solar farm will generate enough power to cut greenhouse gas emissions by an estimated 14,000 tonnes every year.

“The kisikaw pisim solar farm is an example of the work we’re doing to support a greener future today,” said Stuart Lee, EPCOR president & CEO. “This project will make a significant and lasting impact in environmental sustainability by allowing us to produce clean water using clean energy. It will make the water treatment plant more self-sufficient and climate resilient; and EPCOR would like to thank all our partners who brought their leadership and vision to help make it a reality.”

A key element of the project is the Battery Energy Storage System (BESS) connected to the solar farm. Using the latest innovative technologies, the BESS – with more than 1,000 batteries in two separate sea-can style containers within the plant’s fence line – will store energy for use when it’s needed most and help support greater resiliency of the water treatment plant.

The naming is one element of the Memorandum of Understanding (MOU) between EPCOR and ECN, signed in 2020, that formalizes a strong, cooperative relationship between the two parties. In the MOU, both parties acknowledged their shared support for the principles of the Edmonton Declaration, which calls for immediate and urgent action to limit global warming to 1.5 degrees Celsius.

“The kisikaw pisim solar farm is a great example of Edmonton’s commitment to decarbonizing our energy sources,” said Mayor of Edmonton, Amarjeet Sohi. “By collaborating with Enoch Cree Nation, EPCOR leverages this sustainability project to also champion reconciliation and environmental stewardship. I’m glad to see this more than 12-megawatt solar installation come online and I commend EPCOR for their leadership with this project.”

“Congratulations Enoch Cree Nation and EPCOR. The opening of the kīsikāw pīsim solar farm is a significant step forward on the path to a net-zero future powered in-part by abundant clean energy,” said Jonathan Wilkinson, Canada’s Minister of Natural Resources. “The Government of Canada is pleased to have supported this project, which delivered sustainable jobs for Albertans and Canadians, while contributing to our national effort to combat climate change while growing the economy.”

“Using solar electricity – like the one produced by the kisikaw pisim solar farm – to power our transportation sector, heat our buildings, and feed our manufacturing and industrial processes is widely recognized as an essential pathway to an economy that works for all Albertans,” said Randy Boissonnault, Canada’s Minister of Tourism, and MP for Edmonton Centre. “As the energy industry evolves, Edmontonians and Canadians have the know–how to lead the way toward the transition to greener energies and a more sustainable and prosperous future for all of our communities.”

In addition, as part of the project, EPCOR is transferring 31.5 acres of land to the City of Edmonton to extend and improve its recreational trail network. As well, the company has enlarged the wildlife corridor along the river by 25 per cent and added more than three acres of grassy meadow outside of the fence line.